My Second Flight in the DC-3 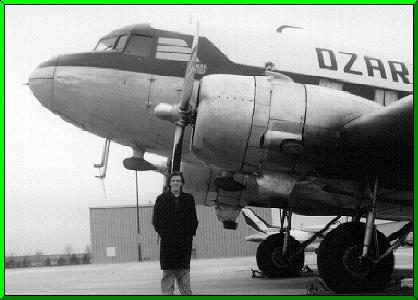 This is part 2 of a story about my experiences in the DC-3 based at Bloomington, Illinois and owned by the Prairie Aviation museum of which not only am I part of the DC-3 challenge but a proud member, too. I had received a call from Norm Wingler (President of the Prairie Aviation Museum Bloomington) 2 days ago. He informed me that he was taking the DC-3 up on Saturday, July 19th 1997 for a couple who wanted to re-new their wedding vows in flight. He mentioned he would be doing another flight and asked if I wanted to come along. Of course, no matter what plans I had would be canceled and I replied to Norm "YES !" rather excitedly. This would be my second flight in this wonderful aircraft, the Douglas DC-3 painted in the livery of Ozark Airlines. (Full details about this are in my first story titled "My first DC-3 flight").

He invited both myself and my wife Kimm. After putting down the phone, of course I am now jumping around the house shouting "YAHOO !!" but….Kimm was unable to go at this time, and so I made arrangements for a replacement. I called my Flight Simming friend Bill Alderson who remained calm and said "sure Trev, I'll tag along". Bill lives not far from I and we have become good friends over the last year through a shared interest in Flight Simulation. The problem with Bill is that he loves Jets more than anything else and the closest he will come to liking a prop is a turboprop (powered by jets). I figured this would be my chance to show him how a 'real' aircraft performs due to my dislike of the types Bill prefers. I called another friend of mine (Howard) who was not able to make the trip and he was pleading with me to give him a second chance. The funny thing was it was not a problem to me as I understood his excuse, but another friend I called, I could only laugh. He replied over the phone "Trev, I cannot make it, I have to hang the drapes up on Saturday". Of course he had other things going on but I could only remember him mentioning about his 'drapes' problem as I type this up. (Sorry Mark). Getting back to that original phone call from Norm, I started asking him questions about the last flight he took me on. I asked what mixture he was using at a flight level (AGL) of 2,000 feet. I had to laugh out loud when he replied "Trev, you are always asking me these technical questions about flying the DC-3". Only someone like Jimmy Stewart from the movie "Flight of the Phoenix" would say that, although I think Norm is modest at times. If I could have his knowledge, I truly would be 'special', a certified DC-3 pilot to me is something indeed.

Well, I had arranged to meet Bill close near my home at 7:45am on Saturday giving us plenty of time for the scheduled 11:00am flight at BMI (Bloomington). The previous night however, there had been wild thunderstorms and I was a little worried as to how the weather would be on the Saturday morning. I was to leave in Bill's Jeep, he had the advantage of a car phone. Should Norm call Kimm of any cancellation, she was able to call us on our way there. Saturday morning arrived, a clear and warm day but a little overcast. Bill arrived and off we went to BMI. On the way there I was staring at the phone thinking (knowing my luck) it would be Kimm to say Norm had called and the flight was off. I think I stared more at that phone than I did anything else on the way there. Bill was his usual calm self and drove within the limits toward Bloomington. As we headed further and further South, the skies would become bluer in color, it was a terrific day for flying. We arrived about 10:00am just in time to see Norm taxi away for the wedding flight. I just love to watch this thing take off and listen to that unmistakable 'hum' from the engines. A nice added touch was to see the DC-3 fly directly above us at about a 1,000 feet almost as though it was saying "Hi, here I am flying again". About 40 minutes later, the DC-3 arrived back with the wedding party, disembarking, still holding drinks of champagne in there hand.

Norm and the co-pilot Doug finally stopped the props and entered the hangar where myself, Bill and a few others were waiting to board for our flight. Norm asked an interesting question…. "As Captain of a vessel am I allowed to marry a couple ?" he asked another colleague. "I know you can do it on a ship, but what about a plane ?" he further questioned. A person holding a video camera replied to Norm (as though reading from a book) A Captain of any vessel can, and has the power to marry a couple on board the said vessel whilst he is in charge of it. Norm had a puzzled look on his face but didn't ask further. I can only imagine he was thinking "How can I marry a couple whilst in flight, if I have to fly the plane at the same time". Some feat indeed I would say. However, I think Norm would do a great job at it, he has the most clearest voice I have ever heard and no doubt he is an Air Traffic Controllers dream, (As long as they don't hear the words "I now pronounce you man and wife"). Well we are about to board the DC-3 for our flight and I turned around to see where Bill was. Not a sign of him though, he did mention that he needed to go to the restroom (that was a while ago) so I shouted ..…."BILL !!", sure enough a muffled cry from the back of the Hanger was heard, "I'm on my way" he said calmly. The DC-3 happened to be parked up against an F4 Phantom aircraft and this gave me an opportunity to get some nice photographs. We boarded the aircraft and I elected this time to sit on the right, Bill sat on the left just as I did on my first flight, and was adjacent to me. We took some photographs and waited for the taxi clearance. Norm was not flying this time, instead his co-pilot Doug would have the left seat with Clyde Zellers, co-pilot, in the right seat.

Bill took great interest peeking into the cockpit to see how Doug and Clyde would operate the props, throttles and mixtures. We were both near the front and as always the cabin door leading into the cockpit was open for all to see. I preferred though to soak it all in, I knew at full throttle and pitch that the Pratt & Whitney 'hum' would be ringing in my ears soon. I didn't have to wait too long either as we rolled along the runway, tail lifting up again almost immediately and into the air we went. The flight was a smooth one though, with no air conditioning, the sweat was pouring down our faces with the exception of the 'hostess' who must have a secret recipe for looking dry at all times. She asked if anyone would like to look into the cockpit during flight and Bill was the first to go in there. I guess he cracked a few jokes to Doug and Clyde as I could hear the laughter in there. I went into the cockpit a little later and it is amazing how a flight simulator can make you aware. I noticed almost immediately that Doug was flying at 1,200 feet AGL, Prop pitch was at 2,000 with mixtures set to auto lean. Cruise speed was 120 kias. Throttles seemed to be at 70%. Temperature outside was about 90 degrees and visibility seemed to be about 15 miles before it was lost in the muggy haze. I said a quick hello to Clyde who I had met before on a previous canceled flight during the winter. He held out his hand as I shook it. On returning to my seat I decided to sit on the left in front of Bill. I sat in the famous Grace Kelly seat. Bill would look out the window from time to time was but more interested in the pilots handling of the throttle controls. For those of you who say a DC-3 doesn't have a GPS system, (like those who especially mention this because I have recently installed one on my DC-3 within my Flight Simulator, the Prairie Aviation DC-3 does indeed have a digital radio stack and a GPS system fitted. Looks quite nice too. Bill said he noticed a HSI in the cockpit very low down but I am not sure about this myself and will have to check to see if indeed there has been one of these recently fitted, too. We flew for about 30 minutes and on the return leg Doug and Clyde performed an amazing short final. Something not easy to do in a Simulator or at least….. not on mine.

The landing was slightly bumpy and at one stage Bill thought it was a totally smooth landing, not realizing that we hung over the runway for a while before actually touching down. He had changed his opinion upon hearing the screeching of the tires. We parked up tight against the F4 Phantom again and I went in search of Norm back at the hangar. He had flight certificates for both Bill and I and I have to say that these certificates are of the highest quality I have ever seen. Included on the certificate of flight is a beautiful picture of the DC-3, wheels down in its now famous Ozark livery. Norm also gave me a video of a recent flight and upon watching this later that afternoon, I watched the in-cockpit video of Norm taking off pushing the yoke quite a way forward, leading me to wonder if this was the reason why the tail lifts up early on this DC-3 ? It's a puzzle to me and no doubt I will have the real answers soon.

Bill seemed to have a great time and I was glad to have shared my second experience with him. I chatted with Norm for a while about the upcoming Air-show and he asked if I could set up my PC equipment so that my DC-3 flight simulator could be used by people attending the show. He asked and I shall do. It should be a nice experience because of all people, I want to see how Norm performs on it. On the way home I asked Bill if he would like to see my set-up and on arriving home, Bill indeed took a look at my Simulator. I think he liked that Pratt & Whitney hum blaring out of my speakers and sub woofer, but I still beleive he will go home and load up a Jet to fly on his PC.

As always, my thanks to Norm Wingler and all those nice people at the Prairie Aviation Museum for yet another wonderful experience I shall never forget. Thanks to my wife Kimm too, who completely understands my love for this workhorse of aviation, the Douglas DC-3. Trev Morson.