Cuban DC-3's fly the Havana/Nueva Gerona/Havana route, but they fly also
to Varadero, Vińales and other cities. 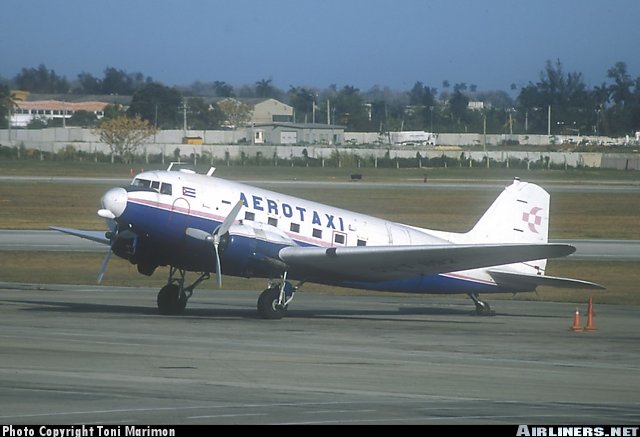 No injuries were reported in the incident, which took place amid heightened security as U.S. forces began their assault against Saddam Hussein's Iraq.

"It was kind of funny," said Steve Torrence, a spokesman for the Key West Police Department. "They landed. One of our police cars got behind them on the runway and put the lights on, and the plane pulled over."

The hijacked airliner, an aging DC-3 "CU-T 1192" commonly used for short tourist hops around Cuba, was spotted by air traffic controllers in Miami shortly before 7:45 p.m.

The plane was approaching U.S. airspace without permission and made no voice contact, according to Federal Aviation Administration spokeswoman Kathleen Bergen. U.S. authorities contacted air traffic controllers in Havana, who said they believed the plane might have been hijacked.

A U.S. Customs Department Black Hawk helicopter scrambled to intercept the plane, according to Becky Herrin of the Monroe County Sheriff's Office.

Later, the plane was escorted to the Key West airport by several U.S. Navy fighter jets that took off from Homestead Air Force Base in Homestead. The hijacked plane landed at Key West International Airport at 8:06 p.m. and was met by dozens of law enforcement officers and high-pitched sirens.

"It was a very, very easy surrender," Torrence said.

The reason for the hijacking was not disclosed. In the past, there have been instances of Cuban planes or boats being commandeered by refugees hoping to defect to the United States.

The hijackers were being interviewed late last night by the FBI. The passengers and crew were spending the night in Key West.

Cuban DC-3 hijacked and taken to the United States

On Wednesday, March 19 a DC-3 Aerotaxi aircraft from the National Air Services Company, license number CUT-1192 and flight number CNI-887 took off from Nueva Gerona airport on the Isle of Youth for Havana, with an arrival time of 6:51 p.m. On board were 31 passengers, five crew and one guard.

The passengers included five children and one Italian adult.

At 7:24 p.m. 10 miles south of the José Martí International Airport, the captain of the plane notified Air Traffic Control (ATC) that there were political problems aboard and he was heading north.

He asked for the coordinates of the quickest route to Miami due to limited fuel supplies.

A few minutes later the captain requested an even shorter flight route in case of insufficient fuel and was directed towards Key West, the shortest route existing in that direction.

At 7:30 p.m. the José Martí International Airport ATC made contact with the Miami ATC and informed personnel there of what was happening, also reporting the plane's location. Miami asked whether the DC-3 was escorted by Cuban hunter aircraft, to which the response was no; the Cuban ATC was told that the plane would be escorted by U.S. hunters until it landed.

The following day, March 20, the Cuban Ministry of Foreign Affairs handed over a diplomatic note to the U.S. Interests Section in Havana, and the State Department in Washington D.C., via the Cuban Interests Office in that country.

The note demanded the immediate return of the aircraft, passengers and hijackers, based on the fact that the incident constituted an act of terrorism, defined as such by several international agreements signed by both Cuba and the United States.

The Cuban Ministry of Foreign Affairs also requested information on the incident, the circumstances in which it was effected and other details available from the U.S. authorities currently holding the plane, passengers, crew and hijackers.