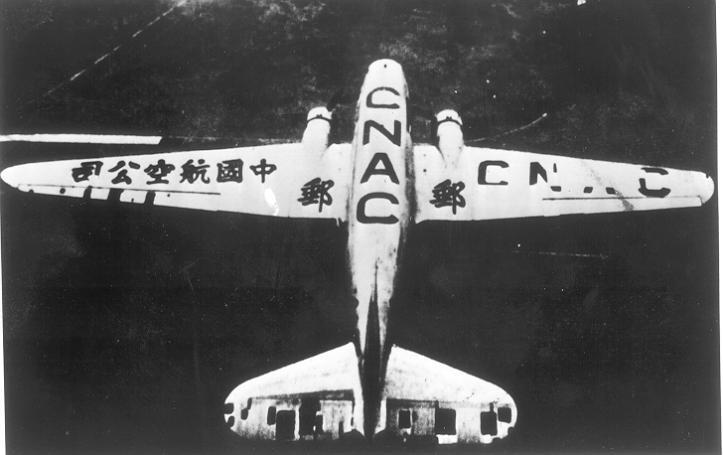 China National Aviation Corporation (CNAC) Originally a DC-3, the plane in question was one of several Douglas models owned by the China National Airways Corporation (CNAC). In the spring of 1941, the plane was flying a scheduled route between Hong Kong and Chungking when it received word by radio that Japanese fighters were in the area. The pilot hurriedly set the aircraft down in a field near Kiuchuan, and the crew sprinted for cover. Moments later, a flight of Japanese Zeroes swooped down and sprayed the DC-3 with machine gun fire. When the shooting was over, the plane's fuselage was riddled with bullet holes, and one wing had been completely blasted off.

The plane's captain, H.L. Woods, radioed back to the CNAC base. "The plane's a wreck," Woods reported, "but if we can get a new wing, I think I can fly her out of here." Captain Charlie Sharp, another American pilot flying for the CNAC, takes up the story from there:

"The hell of it was, we didn't have a spare DC-3 wing, and we didn't know where to get one. We did, however, have a spare DC-2 wing. It was five feet shorter, and it wasn't designed to support the loads of the DC-3 -- but we thought it just might work. And we needed that airplane in the worst way." 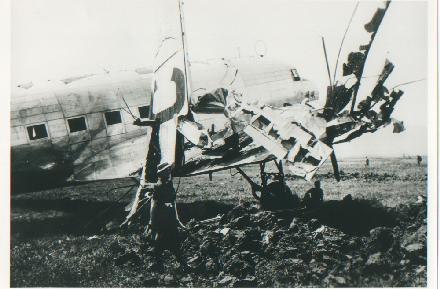 With the help of Douglas field representatives, they bolted the DC-2 wing to another DC-3's underbelly and flew it across the 900 miles of mountainous terrain to Kiuchuan. There, a ground crew bolted the DC-2 wing to the fuselage of the damaged airliner. Astonishing every witness on the ground, the plane bumped across the field and lifted off without a hitch. Concluded Sharp, "We called her the DC-2."

The DC-2½ During World War II, enemy aircraft caught a China National Aviation Corporation (CNAC) DC-3 on the ground just after landing at Suifu, China. The pilot. Captain Woods and his passengers hid in nearby woods and watched helplessy as the exploding bombs laced the field. A 100-Kilo bomb fell through the right wing of the DC-3 and exploded beneath it, blowing the wing to splinters and severely damaging the rest of the aircraft. The only available wing was in Hong Kong, that of a DC-2, which was in the shop for overhaul. Although the wing had the same root shape and chord as that of a DC-3, it was five feet shorter. Nevertheless, thewing was secured beneath the fuselage of a DC-2 and dispatched to Suifu along with its regular overload of passengers and cargo. (This ingenious air freight arrangement was used several times later in the war to salvage downed aircraft.) At Suifu the wing was quickly installed and other essential repairs made. After a short test flight, the aircraft flew back to Hong Kong, picking up a full load of passengers at Chungking on the way. 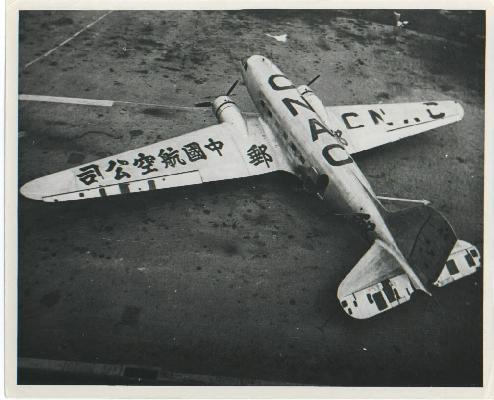 I might clear up a point at this time which has been very much disputed about the attached angle fitting the DC-2 and DC-3. By sheer accident and Donald Douglas' Scoth thrift, he used the DC-2 wing butt and center wing butt jigs, to form the DC-3 angles; however his design engineers called for a heavier angle with a wrap around plus double the attach bolts for the 3 -- so they drilled additional holes between the DC-2 holes; thus we filled all the DC-2 holes and skipped every other in the DC-3 center wing. Douglas built them strong.