The DC-3 in Colombia

Thanks to the APVW Web-site provided by Alex Waning for the information and rare pictures. This site also has some GREAT DC-3 Video's.

Alex Waning has this to say:

On my last trip to Villavicencio I took a photo of three fuselages lying there. See attachment! Two of them identified, one I wrote HK-249 on my paper. There must be one number missing.

Our first glimpse of the old prop-liners was a saddening sight as most of them appear to be just minutes away from being converted into tin cans and pots.

The Colombian Police only have one operational turbo DC-3/BT67, the PNC0213, the rest of their aircraft are without engines and rudders.

The scavenged but still identifiable DC-3 found on the civil portion of the airport was C-47 (HK-124) in the Lacol company colours with its engines and wings removed. Complete were: FAC 667 in Air Force Museum. Unfortunately the museum is closed on weekends so we were unable to visit. One unknown Dc3 , near puente Aereo.

San Andres Island After Bogota, we paid a visit to San Andres Island. There, parked in the grass near the control tower, was a DC-3 N37430, an impounded drug runner that probably will never fly again.

Sadelca is now the largest DC-3 operator with flights scheduled primarily to Mira Flores. They have at the moment three operational DC-3's (HK-1415, 2494, and 3286) and two in maintenance (HK-4189 and 3199). The new Sadelca logo looked very nice on the orangey red painted aircraft. They are planning to purchase two An-32 planes soon, so let us hope they do not replace the DC-3's in the future.

Latina will have its former SAEP HK-2006 flying next month and there are several fuselages of DC-3's lying around the field. They include HK-3348 (C-53), 249(?) and 3350. Transamazonica's HK-3359 looked abandoned as did Lacol's 3215 and Taerco's 1315. Viarco's HK-3349 is being overhauled and was shining and glittering after the polishing of her metal parts. One engine had been removed and a new radar was installed.

Air Colombia still operates HK-3293, and 3292 is in the process of getting titles and the blue cheat-line so she should be flying again soon.

All together I noticed some 23 DC-3's in various forms, from just a fuselage to complete at Villavicencio. Many of the companies are working hard to get or keep their DC-3's operational, but due to the lack of spare parts and money this is a constant struggle.

Again, I would like to add a special note for those who want to make a trip to Colombia:

Hardly anyone speaks English, corruption and crime is rampant as it is the main source of income for many people. Many people are suspicious because you might be from the American D.I.A. Be very careful, guerrilla's can be everywhere and NEVER NEVER go on to an airfield or take photograph's without permission from the authorities. 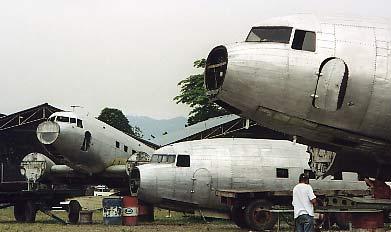 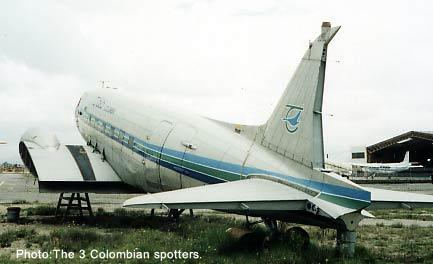 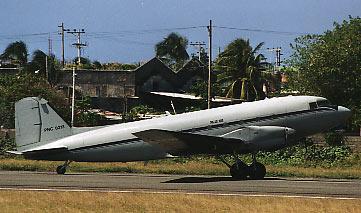