Photo's and story kindly contributed by Jack Lamb .... (Thanks Jack, .. For your second excellent DC-3 story!)

We call this snow ...slush. It happens mostly in late Spring when the snow on the lakes melt and the melt water lays on the ice under the snow cover. It can also happen at -30F or -40F when the lake water comes up through a crack in the ice, or the snow cover insulates a creek or fast flowing water. One can usually see the darker slush areas from the air, but difficult to see once on the ground. It is very dangerous, especially in the severe cold. When one does happen to get caught in the slush (as we say), it could mean an all day or two day job digging out in water up to you knees. STAY AWAY FROM SLUSH !!

On the May 24th weekend of 1972 my family and I were at Clearwater Lake opening up the cottage for the summer season when I got a call from Greg at Thompson.

"DBJ is sitting on its belly on the ice at Tadoule Lake. The props seem to be okay. Fournier's gone to Calgary with the Twin Otter to pick up Field Aviation's air bags." 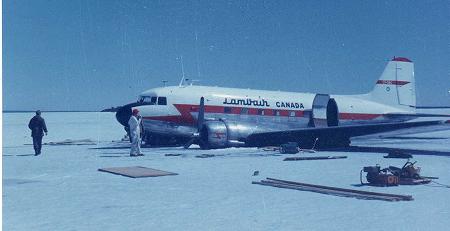 This is the DC-3 (CF-DBJ) that Barbara and I flew from Kabul, Afghanistan to Thompson, Manitoba. It was only on-line for a month when the pilot landed on rotten ice at Tadoule Lake in Northern Manitoba. 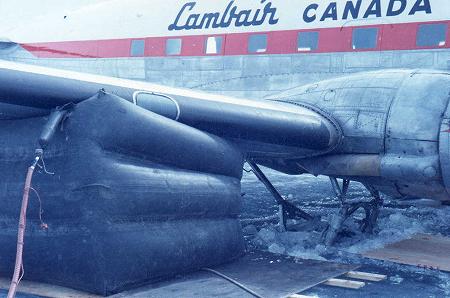 These low-pressure bags are used to raise aircraft back on their wheels during salvage operations. They are inserted under the wings, and inflated by using large volume, low-pressure air supply, such as a common household vacuum cleaner. We brought two Baycrest vacuums from The Bay in Churchill, and my wife's Electrolux from Thompson. The Baycrests were useless. The Electrolux performed without a hitch, lifting the twenty-seven thousand-pound aircraft with ease.

Greg, his son Tommy, Roy Boyes, Insurance Adjuster Hank Eisler, and I worked all day trying to get the DC-3 onto solid ice. The air bags lifted the aircraft high enough for us to slip four by eight sheets of steel and 3/4-inch plywood under the wheels. The air was let out of the bags, and the aircraft stood on it's own wheels. The concentrated weight of the aircraft would force the weakened ice down as we winched it ahead away from the hole. We were not making much progress. The ice, in the warm weather, was getting worse by the hour. 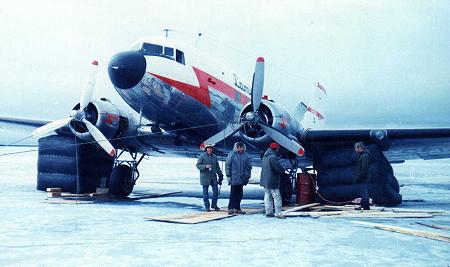 DBJ back up on her feet. The air bags worked very well. The weight of the DC-3 is pushing the rotten ice down forming a puddle under the aircraft. Tommy Lamb, Orville Hill, Roy Boyes, and Dan Westinghouse trying to figure out their next move.

It was now eleven o'clock at night. We were tired, wet, and cold.

"Well boys, I think it's a loosing battle", said Greg. "After we have a sleep, let's start pulling radios, props, engines, and anything else we can salvage"

The bedrolls were rolled out inside the DC-3, and we crawled in for the night. The DC-3 has a tail wheel, and as such, the cabin floor slopes down. By four o'clock the next morning we were just a jumble of bedrolls piled up in the rear of the cabin as we all slid down hill during the night. Greg was up about four o'clock, and had a walk-around outside inspecting the stricken DC-3.

"Boys lets go. The temperature has dropped, and the ice is firm."

Sure enough, the temperature was minus five degrees with a fairly stiff breeze blowing out of the East. The rotten ice had frozen into a beautiful firm, flat surface. The DC-3 was facing directly into the wind.

"Greg, let's load up all the salvage gear, and run up the engines. If everything is okay, I'll take-off and head for Thompson", I said.

When the aircraft went through the ice, the starboard oil radiator was pushed up inside the engine area, out of the air blast. I was a bit concerned about this during the run-up. The engines and props ran-up OK. The aircraft was facing into the wind, and I had eight miles of smooth ice surface in front of me. Slowly opening the throttles to take-off power, the DC-3 started to move and was airborne in less than a thousand feet. I raised the landing gear and circled the salvage site just to make sure the aircraft was going to perform as it should. Greg was on the radio in the Otter.

"Everything looks good from here Jack."

"OK. I'm heading for Thompson. See you in a couple of hours"

The oil temperature on the starboard engine stayed within limits for the first twenty-five minutes, then slowly started rising, settling down just inside the redline. I throttled that engine back a bit, letting the port engine take most of the load. We landed at Thompson without further incident. The DC-3 was soon back on the line after the maintenance crew gave the old girl a thorough inspection.

The insurance company commended us for saving the aircraft, thus preventing a large claim. When an accident occurs, there is a common misconception among the misinformed.

I have heard this remark over and over again. Everyone looses in an accident. The airline is short an aircraft, plus facing increased insurance rates the next year. Claims for lost or damaged freight have to be looked after. The airline's reputation suffers. Thousands if not, millions of dollars paid out by the insurance companies. The underwriters at Lloyds of London back off, and tend to lean towards investing in sure things, such as life insurance or office buildings.

The only winners are the banks and finance companies. They get their money back from the insurance claim, then turn around and lend it to you again. "We have to add another interest point due to your accident record."

The two biggest mistakes we ever made in business were borrowing money, and having too much trust or faith in lawyers. William Shakespeare had it right in 1594 when he said; "The first thing we do is get rid of the lawyers."

C-FDBJ of Perimeter, cancelled 11 May 88 and sold to USA, 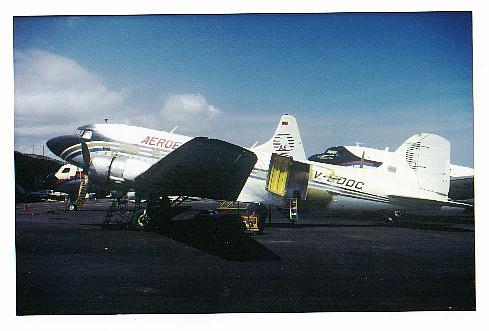 Michael S.Prophet provided the following information on the photgraph above......

This is a picture of Aeroejecutivos DC-3 at Caracas international airport taken September 1999. YV-500C was just coming out of an overhaul and it still needed to be painted The whole interior was renewed included the cockpit and cargo compartment with stainless-steel floor-plating and side-panels. The cockpit was painted grey and the instrument-board was painted black. The a/c construction plate...it has two! DOUGLAS PLATE: factory no 6135 Model:C47-R1830-92 COMPLETED: 'scapped out' US ARMY CORPS: type:C-47 Serial no: AC41-19492 Order no:AC-15847 Date accepted:'scrapped out' 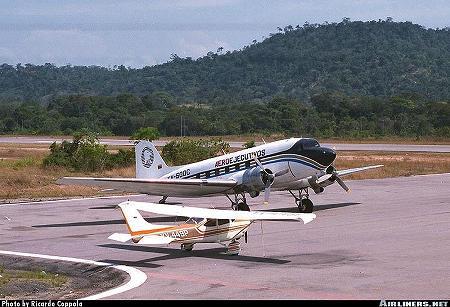 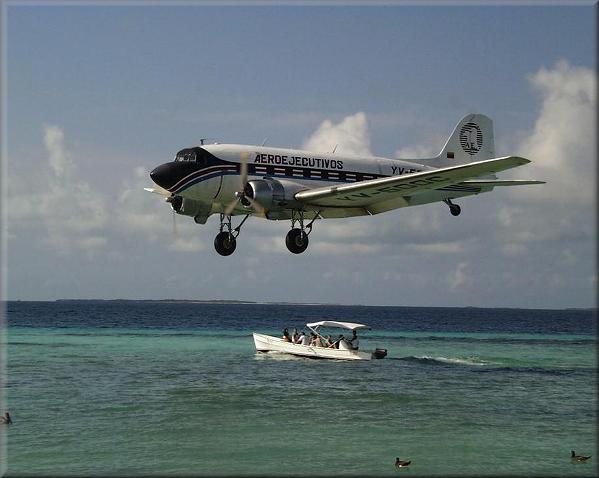