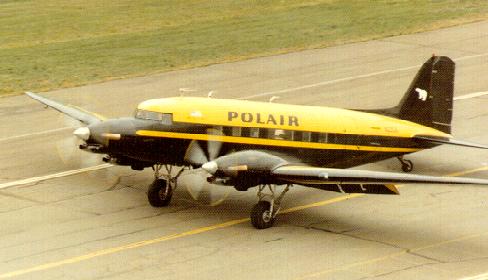 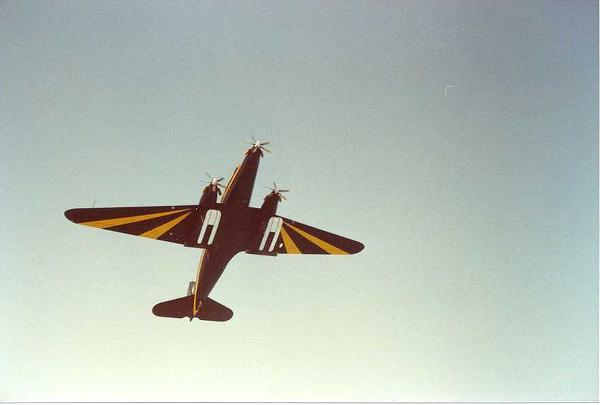 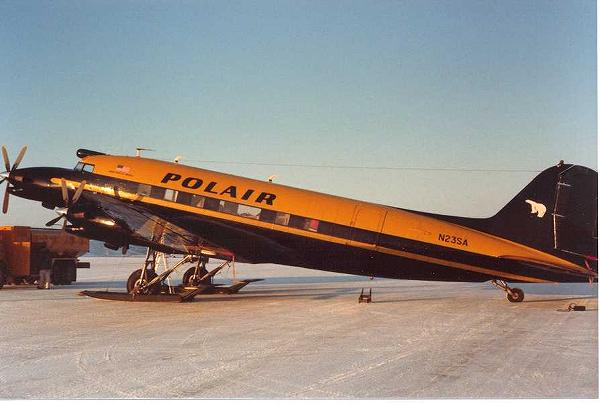 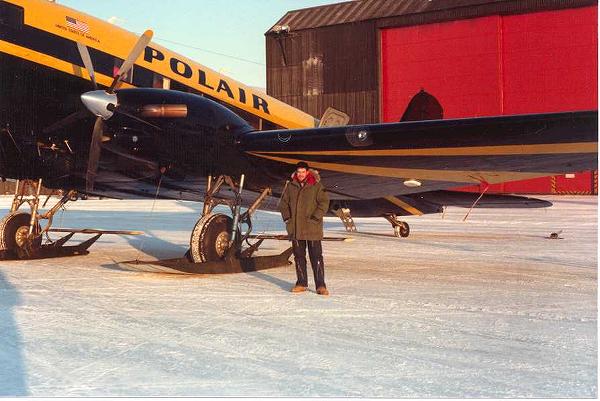 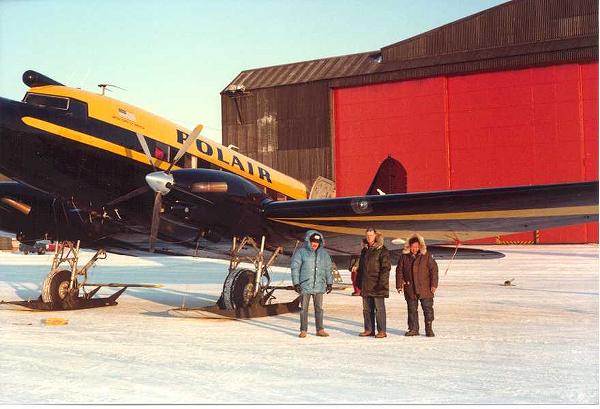 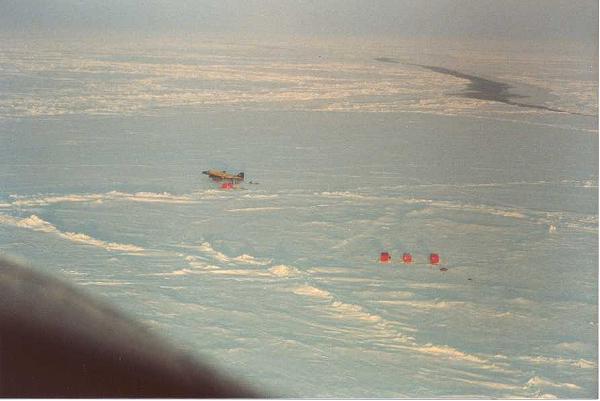 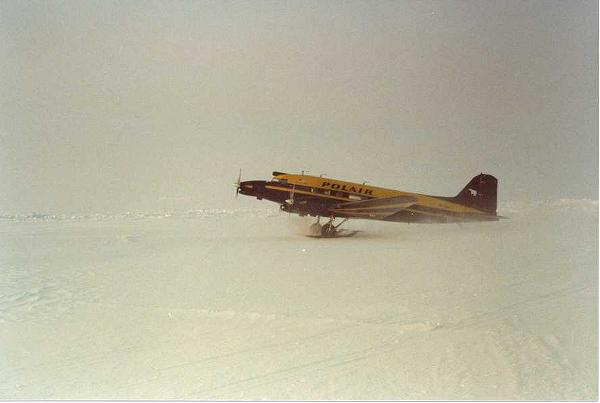 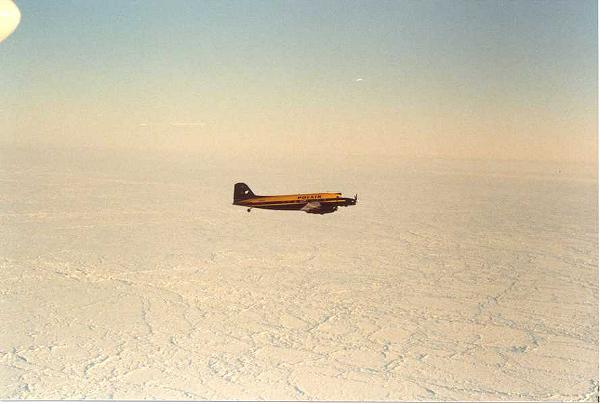 This Polair Tri Turbo DC-3 (of Santa Barbara) was powered by three Pratt & Whitney PT6A-45A turbo prop engines and used five bladed Hartzell propellers. The Aircraft made it's first flight on 2nd November 1977 and in 1979 it attended the Paris Airshow. It was once leased to the US Navy serving in Fort Barrow, Alaska and was fitted with ski's. It also served in the Antartica, 700 miles from the South Pole, installing hydrophonic microphones and other electronic devices beneath the ice to monitor the movements of marine life. One source who had seen the flight logs of this aircraft reported that it was used for some 'odd' undercover military operations during the early 1980's. The aircraft had STOL like capabilities and could use any combination of engines during flight, including the center engine alone. It was found to vibrate very heavily and the engine exhausts being in line with the cockpit windows made pilots asphyxiated as well as have them suffer watery, stinging eyes. The engines also had problems with cold weather. Needless to say, it never obtained an FAA certificate. Obviously the flight did not offer the comforts one would expect of business class tickets on a commercial flight, but there is still a big difference between the creature comforts of a business class flight and bare minimum safety. It was known as the Conroy Tri-Turbo version and Jack Conroy first started using Dart 510/512 turbo engines on DC-3's taken from Continental Airlines Vickers Viscount 812's. This Polair version was later seen in the Mojave Desert without it's engines sometime during the mid 80's. 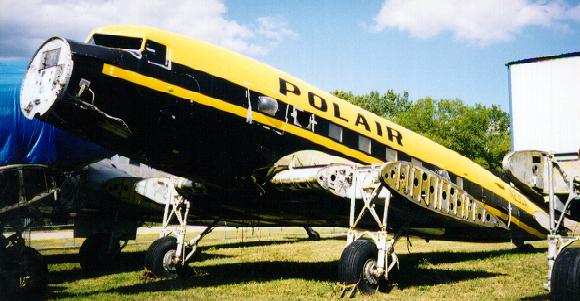 Above is a picture I took at Basler Aviation, Oshkosh Wisconsin during the 1998 Airshow. I had also seen this sad sight the previous year in the same place. I asked the Basler folks if they would donate it to a museum, considering it's history, it deserves a good place. They said they would gladly do it, if only someone would pay the towing expenses. The problem now is that it is rotting away at Basler sitting outside in the severe weather conditions of Wisconsin, US. So much for her old nick-name .. "Spirit of Hope", as it is now, there seems to be 'no hope' unless someone can rescue this bird with it's great history, and refurbish it to musuem conditions. 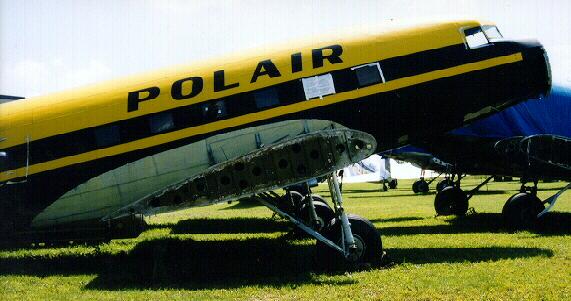 And to add to the misery, the photograph above, I took again at Oshkosh on August 1st, 1999, it is still rotting away. 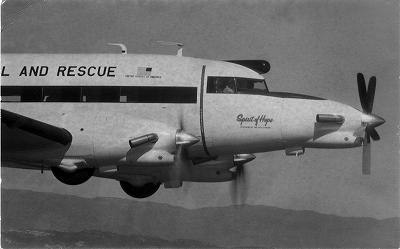 Chris Hutton says.. I spent many years working for Jack Conroy building and flying the TT-3. It had remarkable performance for a 1942 airframe. I am sorry to see the sad state that it is in today. The rest of the pictures are marvelous. I would however, like to mention that some of the information you have posted on the TT-3 page is incorrect. The plane never suffered from any vibration issues. In fact it was very smooth indeed as DC-3s go. There were no problems with exhaust entering the cockpit and effecting the flight crew. The flight deck environment was very comfortable. The engines were very reliable and trouble free in any climate including flight operations at the North Pole. We operated from an open ice strip at Station Nord, one of the northern most 'airfields' on the planet where cold start temperatures were routinely -40 degrees. The lack of type certification was due largely to the untimely passing of Jack Conroy and resistance from McDonald Douglas, (they liked to sell new airplanes). This airframe had a very interesting history with some great stories behind it. I hope you can rectify the errors on the page as the former employees of Specialized Aircraft and pilots of the Tri Turbo Three have great respect for this hard working airplane. I would also be very interested in any efforts to preserve/restore the TT-3.