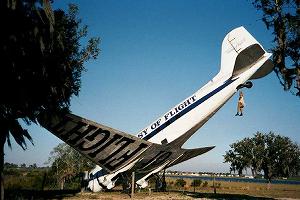 The city of Orlando, Florida, is blessed with more theme parks per capita than any other location on Earth.  One of these theme parks is an aviation museum based about 20 miles southwest of Walt Disney World, named Fantasy of Flight.  It is owned and operated by Mr. Kermit Weeks, a self-described aerobatics competitor and aircraft designer.  Trev Morson of DouglasDC3.com visited the facility in 1998 and was favorably impressed, noting that Fantasy of Flight had a fine collection of historic aircraft.  Being an avid DC-3 enthusiast, Trev was intensely interested in the DC-3 they on static display in a hangar (at that time).

Despite missing its engine components, it looks like the old bird is in pretty good shape, doesn't it?  Unfortunately, things have changed a lot at Fantasy of Flight since 1998.  The need for ever-increasing revenue, combined with increasingly sensationalized and tasteless media coverage, sometimes moves people to make dubious marketing decisions.  Now, Fantasy of Flight has decided to display the DC-3 in a "crashed" position outside of their facility, in a decidedly inelegant and uncouth marketing effort to attract more visitors.  As if an airplane in a state of nose-down wreckage was not sensational enough, a "dead" person/mannequin hangs from the tail wheel!  Is it responsible for a place billing itself as the "World's Greatest Aircraft Collection" to sensationalize a faked crash of a vintage aircraft, decorating it with a fake dead person?  You can bet that the National Air & Space Museum in Washington, D.C. doesn't have advertising like that!

If you were on vacation with your family, and had a choice of seeing a crashed aircraft (including simulated dead people) or Mickey Mouse's Magic Kingdom, which would you choose?  Those of you who didn't wish to traumatize your children would probably choose the mouse, right?

This kind of low-brow advertising caters to the public's ignorance about air safety and the commonly-held myth that air travel is inherently unsafe and wildly dangerous.  Nothing could be further from the truth.  Reality and statistics demonstrate that air travel is safer than road travel by a remarkably large margin.  Some experts estimate that your odds of being in a fatal airline accident are 3 million to 1.  Don't believe us?  Read an excerpt of this article by Dan Rupp on Air Safety Online:

"When you step aboard a commercial aircraft, you are in the hands of some of the most well trained professionals in the world. Most pilots go through their entire careers without a major incident. As one visitor suggested in our discussion board, count the number of automobile accidents that you hear of in one week, including your local traffic reports. Then count the number of commercial airplane crashes that you hear of in a week. The point is that if you cancel your airline reservations today and decide to drive to your destination, you aren't in the hands of skilled pilots anymore. You are among countless inexperienced, irresponsible and drunk drivers just feet away from you driving along the freeway at 70 miles per hour."

The statement "Most pilots go through their entire careers without a major incident" deserves special attention.  Compare that to your own driving experience.  How many people do you know that have been in a car accident, either as driver or passenger?  Do you go through detailed departure, enroute and arrival checklists every time you go around the corner to pick up milk, or drive to work?  Does a road traffic controller advise you of other cars in your vicinity, and ensure that all cars maintain appropriate distance from each other, speeds, and routes?  Does a second driver ride along with you, in case you are incapacitated?  Is your car equipped with a second steering wheel, accelerator and brake pedals for your second driver?  How about terrain- and vehicle-avoidance radar?  Satellite-based GPS navigation, with radio-based VOR/NDB navigation capability as well?  An emergency locator transmitter (ELT)?  Flight data and cockpit voice recorder?  And finally, it is guaranteed that a maintenance crew does not maintain a strict log of maintenance activity on your car, checking all essential systems well ahead of each component's MTBF (mean time before failure) each time you arrive home.  If that alone happened, your car would probably last you 30-40 years!  Not even a Titlemax representative, or someone who inspects Titlemax cars for a living, ever sees a car that well maintained.  All of these things (and more) are standard features and procedures on modern commercial airliners.  You can see by even this brief example the many reasons why it is illogical to fear air travel.  And yet millions of otherwise rational people, unaware of the mandatory air safety features and regulations, persist in this irrational belief.  Through its ridiculous and crude "crash" roadside ad, Fantasy of Flight is promoting this kind of nonsensical thinking.

Then consider that the DC-3, although lacking most of these modern gadgets, is one of the safest and most reliable aircraft in all of aviation history!  It has served with distinction in both military and commercial roles, from D-Day through the Berlin Airlift, to the Vietnam War and right up to the present day!  Wouldn't a true "fantasy" be to see one in flying condition or just to perhaps see a well-preserved one on static display?  If we do not preserve these vintage aircraft, who -- particularly among future generations -- will be reminded of the greatness of this aircraft, the role it played during several wars, the countless combat losses of those courageous pilots, loadmasters and paratroopers who flew aboard it, and its incredible overall contribution to aviation? At the very least, a facility such as Fantasy of Flight -- that has the ambition to call itself the "World's Greatest Aircraft Collection" -- should demonstrate more common sense than to let a valuable vintage aircraft rot by the roadside in such an undignified manner.

If you are DC-3 fan, we have no doubt you feel as we do and are simply appalled at this display. The Fantasy of Flight museum does not even list the DC-3 in its aircraft collection listing!  It appears they have cut loose this plane and are content to let it decay.  That seems like a monumental waste of an historic aircraft, not at all in keeping with the principles of a vintage aviation enthusiast that Mr. Weeks purports to be. We still to date have no infomration on this DC-3 regarding it's history, construntion number etc..  if you have information, please e-mail me.

Here some letters of Protest ..

I was appalled to hear of the DC-3 that is displayed in the manner that you have chosen. Any aircraft shown as an example of the horrors of an aircraft crash, is not only done in exceptionally poor taste, but lack of any understanding for the feelings of those who have experienced a crash or lost loved ones in air accidents. I am an DC-3 pilot who has flown this plane in the military as the C-47 and configured as the AC-47 in combat. Your display shows a callous indifference to the memory of this aircraft and a wanton disregard for the feelings of the many who have experienced grievous losses due to air accidents. Clearly Mr. Weeks needs to re-consider his position regarding this display. Surely there is a better method to display this fine old plane and attract the tourists to your facility.

I have just been made aware of the possible display of a DC 3 at your facility in a roadside crash display to attract attention. If this is indeed still the case, may I say that it is in extremely bad taste to display any aircraft in a crash position (especially post-911/World Trade Center with a "dead" dummy hanging from the tail section!)solely to gain attendance to your business. It is disrespectful to the aviation industry , disrespectful to service personnel, air crews and passengers who have died, disrespectful to the service record of the DC 3 and all aircraft in general and a disservice to all aviation enthusiasts worldwide. At one time, the plane was part of your general collection. I urge Mr. Weeks  to return the DC 3 to its proper place of dignity in your collection and to restore a tarnished image that your business currently portrays. As long as the DC 3 stays in it's current position, I will boycott supporting your business in any way and will encourage other aviation  colleagues  to do likewise. Hopefully, you have already made appropriate changes that will render this letter unwarranted

And here is just one typical reply..

I wish to respond to your message as a matter of courtesy and attempt to address your concerns, as well as to clear an evident misconception about the DC-3. Indeed, the display is to draw attention to our aviation attraction, however to suggest, even remotely, that any disrespect is intended to any aspect of our aviation or military heritage is to ignore the many millions of dollars and the life work of Kermit Weeks to rescue and restore many examples of that very history. Anyone at all knowledgeable about Kermit and the collection here will in no way associate Fantasy of Flight with any disrespect to the aviation industry, indeed, quite the opposite is true. As to the particular aircraft in question, it was never a part of the display aircraft, but instead was purchased for its present purpose from a location in St Petersburg, Florida where it performed a similar function. This aircraft is severely corroded to the point of making restoration impossible. The alleged deceased crew is actually attired in a jump suit and parachute and is descending from the tail of the aircraft. If you traveled Interstate 4 on a regular basis, you would see this mannekin dressed in attire appropriate for the season. For example, December features a Santa costume. large bunny for Easter, Uncle Sam for the Independence Day. and a pilgrim outfit for Thanksgiving. This whimsical display receives numerous complimentary comments from regular commuters past our location who enjoy anticipating what might appear next. I personally am a veteran of service in the US Navy, as are many of our staff here, and would view very unfavorably any denigration of our armed services or our great nation, and can assure you that is not the case. As to your proposed boycott, that is certainly your right as a US citizen, a right supported by all here at Fantasy of Flight, and a right that many of us served and fought for. Unfortunately, such a boycott would serve only to deny you and others the appreciation and gratification gained by viewing the World's Greatest Aircraft Collection and associated aritifacts on display. We celebrate our aviation heritage every day and are very proud of the collection and our restoration efforts. In closing, I will note that we do indeed have future plans to replace the display with a monument to the aspirations of mankind to break the bonds of earth and fly, both in the literal and figurative sense. We support the expansion of the human spirit to reach always greater accomplishments and the examples contained in aviation history provide ample inspiration for all of us and sincerely regret any misinterpretation of those goals.

There are still nearly 1,000 DC-3's today in flying condition and the number is growing through your excellent restoration efforts.